Eri Yamamoto Trio: In Each Day, Something Good 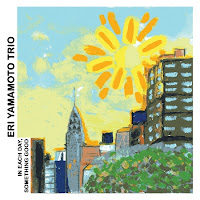 "As I listened to this CD I tried to think of another recent release that was at once so progressive and yet so accessible. I couldn't think of one."
Label: Aum Fidelity
Personnel: Eri Yamamoto, piano/David Ambrosio, bass/Ikuo Takeuchi, drums
Genre: contemplative piano jazz
Recommended for: everyone

Eri Yamamoto is an accomplished pianist and composer who has built a following in the jazz precincts of New York since moving to the U.S. from her native Japan in the 1990s. Her latest CD, "In Each Day, Something Good," is a quirky combination of Yamamoto originals; half the tunes were inspired by her life in New York, while the other half were originally composed as a kind of soundtrack for the 1932 silent film "I Was Born, But..." by famed Japanese director Yasujiro Ozu. The quirkiness doesn't end there. The tunes bear titles like "Sheep Song," "Let's Eat, Then Everything Will Be Ok," and "We'll Figure Out Blues."

But while Yamamoto (video) may be possessed of an offbeat sensibility, her musicianship is assured. The vibe throughout "In Each Day" is one of moody contemplation, buoyed by Yamamoto's compositions, tunes that start out as deceptively simple structures, then, as they progress, bob and weave to create ornate aural tapestries.

Yamamoto avoids the predictability of the standard jazz construct - state the melody (or head), improvise around it, then repeat - with a style of playing that could almost fall under the heading of free jazz. On "Let's Eat," for example, she introduces an elusive and subtle melody through a series of quiet, silky arpeggios, then gradually builds upon the tune until it reaches a crescendo of block chords, a finale that's followed by still more quiet. Much like a wave crashing on the shore, then receding once again, Yamamoto's music draws on the pulse of nature and feels, for want of a better word, organic.

But what sets Yamamoto apart from free jazz acolytes is her unabashed lyricism. Her tunes are eminently listenable, and might even be hummable if they weren't quite so complex. As I listened to this CD I tried to think of another recent release that was at once so progressive and yet so accessible. I couldn't come up with one.

There's a temptation (a pretty silly one when I think about it) to compare Yamamoto to one of her jazz-playing countrywomen, Junko Onishi (another of my favorite contemporary pianists, as it happens). But the two are poles apart, musically speaking. Onishi is all about chops; just watch her fingers fly across the keyboard as she fires off Ornette Coleman's "Congeniality" in this awe-inspiring YouTube video and you'll see what I mean.

Yamamoto, on the other hand, isn't one to show off her technical prowess. Her compositions, and her playing, are the very essence of understatement. That's not to say she doesn't have a command of her instrument; on "We'll Figure Out Blues" Yamamoto, backed by bassist David Ambrosio and drummer Ikuo Takeuchi, shows she can swing with the best of them. Indeed, the song's title is a misnomer; from the sounds of "In Each Day," it's clear Yamamoto has things figured out pretty well.

I've been a jazz fan all my life, and this blog is an attempt to write thoughtfully about the music. If you've got a CD to be reviewed e-mail me at jazzcdreviews@gmail.com

Every Tuesday from 7-8 p.m. eastern I host the "Jazz Cafe" on WWFM 89.1 HD2 in New Jersey. Click the link to hear it streaming online. Give it a listen, and send me your thoughts and requests. Recent playlists are here.

Also, check out my Amazon jazz CD store and our Facebook page.